Bouchard Finlayson’s Galpin Peak Pinot Noir has once again been ranked as the top Pinot Noir in South Africa, scoring a full 100 marks in the 2018 South African Wine Index Fine Wine Awards (SAWi).  Recognised globally for its quality, excellence and consistency, the Galpin Peak has now held the No. 1 spot for 10 years in a row, this year also scoring the 12th highest points across all categories in the Fine Wine Awards.

In addition, Bouchard Finlayson Hannibal was also rated first in the class of Unique Red Wine Blends in 2018, for the intriguing blend of Pinot Noir, Shiraz and Italian cultivars (Sangiovese, Nebbiolo, Mourvédre and Barbera).

Collectively these high scores have placed Bouchard Finlayson in the Top 5 Red Wine producers and in the Top 10 Wine Producers overall in South Africa for 2018.

The Hemel-en-Aarde Valley boutique winery, owned by the Tollman family and headed by Victoria Tollman, founder Peter Finlayson and winemaker Chris Albrecht, is also known as one of South Africa’s leading Chardonnay producers. This was once again confirmed by the 2018 SAWi Awards where the Bouchard Finlayson Overberg Crocodile’s Lair/Kaaimansgat Chardonnay received a Platinum rating (96.78), while the Bouchard Finlayson Hemel-en-Aarde Valley Missionvale Chardonnay scored a Grand Gold (94.69).

The SAWi organiser says that the system distils the collective wisdom of a multitude of authoritative wine competitions and wine reviews into a single point score which is consistent, and drowns out much of the subjective noise of various judging panels. Through SAWi’s Mathematical algorithm, patterns are recognized making it easy to distinguish wines which are consistently accepted as exceptional. Such wines have special value, especially given the rolling nature of adjudication over multiple years – the consistent performance of Bouchard Finlayson’s Pinot Noirs and Chardonnays being perfect examples of the index at work.

TINTSWALO TO EXPAND WITH THE LAUNCH OF TWO NEW PROPERTIES 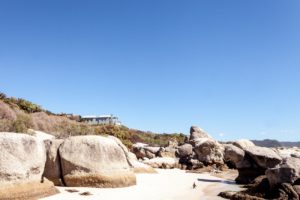 Tintswalo Lodges will be opening two new properties in October 2018 with the launch of Tintswalo at Lapalala Wilderness in the Waterberg (Limpopo province) and Tintswalo at Boulders Boutique Villa, a private villa overlooking Boulders beach and its world-famous penguin colony. Completing the current Tintswalo portfolio is flagship properties Tintswalo Atlantic in Cape Town, as well as Tintswalo Safari Lodge and Tintswalo Manor House in the Manyeleti Game Reserve.

Family owned and managed, properties within the Tintswalo portfolio are defined by their stunning locations close to nature, warm hospitality and attention to detail, as well as the unique experiences on offer to guests. Says Lisa Goosen, CEO of Tintswalo Lodges: ‘After operating Tintswalo successfully for the past 15 years, preparation meets opportunity and we are thrilled to announce the expansion of the Tintswalo brand.’

On 1 October 2018 Tintswalo at Boulders Boutique Villa will be opening in Cape Town, surrounded by fynbos and with unobstructed views across Boulders Beach, which is known all over the world for its resident colony of endangered African penguins. With a total of nine double suites, as well as a children’s suite, Boulders Boutique Villa will operate on a bed and breakfast basis, or as a private villa. Exclusive-use options include either four suites only, or the entire villa for groups of friends or families travelling together for extended stays of four nights or more. Known for its pristine swimming beaches and the penguins as star attraction, Boulders is located on route to Cape Point. Like sister property Tintswalo Atlantic, it also forms part of the Table Mountain National Park.