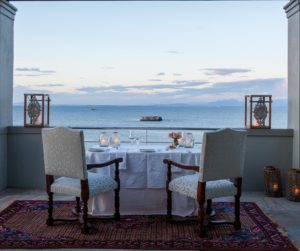 Tintswalo Boulders Boutique Villa (Simon’s Town, Cape Town) has extended its culinary offering with the introduction of in-house dining options for resident guests. In addition to Tintswalo’s signature breakfast feast that is included in the rate, guests may now order family-style platters and dessert to enjoy dinner on the terrace overlooking Boulders beach, in the wind-protected courtyard around the firepit, or in the spacious indoor dining areas on chilly evenings.

A variety of wholesome, 2-course menus are available to choose from, including Mustard crust roast beef and jus with a steamed green veg medley, duck fat potatoes, Tintswalo salad and freshly baked breads, followed by Mini-lemon meringue. Other options include Sea bass & prawn curry with carrot, red onion and coriander salad, served with steamed basmati rice and papadums, ending on a sweet note with a Chocolate brownie with vanilla ice cream and chocolate mint glaze. Light meals are also available for lunch, including salads and sandwiches, as well as a Cake of the day. The villa is now also licensed and offers a full bar and wine list.

Tintswalo Boulders offers guests direct access to the boardwalk leading to the famous penguin beaches, and since opening two years ago, has become a popular destination for celebrations and for families with children. 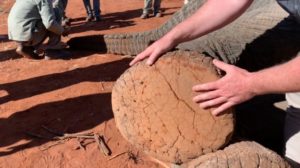 Tintswalo Lapalala has launched two conservation participation experiences that offer guests the unique opportunity to join the Lapalala conservation team in rhino and elephant research and monitoring activities in the Lapalala Wilderness Reserve in the Waterberg (Limpopo Province).

Lapalala Wilderness Nature Reserve is committed to ensuring the survival of Africa’s rhinos and in doing so, applies best practice research, management and monitoring of these magnificent animals. As part of these management programmes, the reserve conservation and veterinary teams are in the process of implementing various monitoring methods which include, ear-notching, DNA sampling, as well as the inserting of microchips on each animal.

Guests are invited to participate in one of these Rhino Experiences that will take place on four specific dates throughout 2021 (May 7-9; June 18-20; July 16-18; August 20-22). The veterinary team will dart and immobilize a white or black rhino and participants may assist with monitoring the animal during the capture. The DNA collection forms part of the Rhino DNA Indexing System (RhODIS), which is a forensic tool that stores a unique genetic fingerprint for every rhino that has been sampled using blood, tissue and horn. It also plays an important part in Lapalala’s rhino security initiative and its fight against poaching as DNA data may be used as evidence in court.

The Lapalala Wilderness Reserve is located within the Waterberg Biosphere Reserve, an official UNESCO World Heritage Site. Over the past 40 years the reserve has become a beacon for wildlife research and conservation in South Africa. Recognised as one of the largest and most scenic private reserves in southern Africa, its abundance of flora plays home to a vast array of wildlife that is protected within its 48 500 hectares. This includes 300 bird species, 50 fish species, 147 mammal species, 114 reptile species, 33 amphibian species and various breeding projects. Eco-friendly Tintswalo Lapalala is operated off the grid to accommodate only 16 adults and four children, and as one of only two lodges within the reserve, it guarantees a rare, and personalised wilderness experience.

Guests may also have the rare opportunity to get up close and personal with the giants of the bush during an Elephant Collaring operation. The 27 elephants within the reserve are carefully monitored as part of the sustainable management of the population. From time to time, as an elephant collar needs to be replaced, a small group of guests have the chance to join this once-in-a-lifetime adventure. Guided by an experienced ranger, the group is driven in an open 4×4 safari to meet up with the helicopter used to locate and dart the elephant. Guests may assist the veterinary team in monitoring the elephant’s vital signs, such as breathing rate and temperature. DNA samples are collected while the elephant’s collar is replaced, before the tranquiliser wears off and the elephant is free to join its herd again.