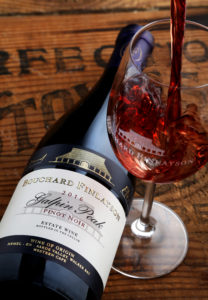 Bouchard Finlayson has received global acclaim in the International Wine Challenge (IWC) 2018 for the 2016 vintage of its flagship Galpin Peak Pinot Noir, not only taking a GOLD medal, but also winning Trophies as BEST SA PINOT NOIR, as well as BEST SA RED.

Thousands of wines from 55 countries were put to the test by a panel of experts in this prestigious competition. Now in its 34th year, the IWC is accepted as the world’s finest and most meticulously judged wine competition which assesses every wine blind and judges each for its faithfulness to style, region and vintage. Throughout the rigorous judging processes, each medal-winning wine is tasted on three separate occasions by at least 10 different judges.

In last year’s IWC competition, the 2015 Galpin Peak also won a gold medal, as well as the regional trophy. It was also announced this week that this particular vintage has been included in the coveted Wine Merchant TOP 100 list for 2018 – a competition devoted to wines in the independent trade and judged entirely by specialist independent wine retailers in the UK.

Tasting notes describe the 2016 vintage as having ‘an earthiness on the nose, followed by excellent colour and bold palate complexity. Dark red fruit with a savoury mixture of cherries, plums and cinnamon drift into an extended palate feel, whilst eleven months in French oak barrels will allow for an extended maturation.’