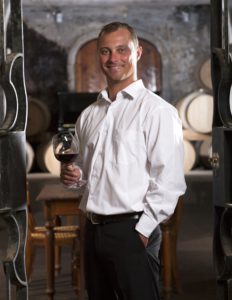 Chris Albrecht (38) has been appointed as the Winemaker at Bouchard Finlayson. His promotion follows after seven years working alongside Peter Finlayson as Assistant Winemaker. Widely recognised as South Africa’s ‘pinot pioneer’, Peter Finlayson continues to represent the brand on an executive level locally and internationally as founder of the Hemel-en-Aarde Valley winery.

After completing a BSc Agriculture in Viticulture and Oenology at the University of Stellenbosch, Chris Albrecht gained international experience spending three years working six vintages in three different countries. These included two harvests in New Zealand, the first at a small family-owned property in Gisborne and the second an industrial-scale operation in Auckland. In France he further extended his knowledge learning from a chateaux owner in the Cote de Bourg commune of Bordeaux and a harvest the following year in Lalande de Pomerol.

Returning to South Africa, he spent four years as the Winemaker at Topiary Wines in Franschhoek. Topiary was then a newly built winery with established plantings of Shiraz and Cabernet Sauvignon. It was however a young block of Chardonnay that would prove to be the future star. During his tenure at Topiary, both the 2008 and 2009 MCC Blanc de Blanc was awarded 5 stars in Platter’s Wine Guide. While working at Topiary, he also had the opportunity to take a brief sabbatical to spend a vintage in California’s Paraduxx, which is part of the Duckhorn stable.

In December 2010, Albrecht started his career at Bouchard Finlayson, cutting his teeth on Pinot Noir in the envious position as Peter Finlayson’s assistant. As from the 2017 harvest, he was promoted to head production. His travels abroad in support of marketing efforts have included a study trip to Burgundy earlier this year, offering fresh inspiration and benchmark perspective.

Bouchard Finlayson continuous to rake in accolades, not only for Pinot noir, the cultivar it’s best known for, but also for its excellent range of Chardonnays. During Albrecht’s tenure at the winery, the 2015 Missionvale Chardonnay was awarded Gold in the 2017 International Wine and Spirits Competition (IWSC), one of the world’s most prestigious wine competitions, after the 2013 Galpin Peak Têtê de Cuvée Pinot noir also won a Gold Medal in the same competition, the year before (2016). The 2015 Galpin Peak Pinot noir won a Gold Medal and the Regional Trophy in the International Wine Challenge (IWC) 2017, after the 2013 vintage scored 5 stars in the 2016 Platter Wine Guide.