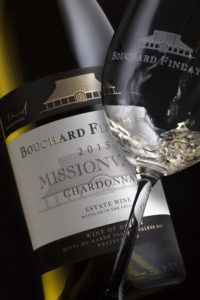 Bouchard Finlayson was celebrated on the world stage at the Intrepid South African Trade Show in London, where it was announced on 13 September 2017 that its famed 2015 Missionvale Chardonnay received a Gold Award in the International Wine and Spirits competition (IWSC) 2017. At the same time, it was revealed that the 2015 Crocodile’s Lair Chardonnay was scored at 95 points by Tim Atkin.

The Missionvale is described as a ‘robust Chardonnay with loads of creamy feel. This supported by subtle peach and melon flavours following a zesty citrus watermark. The after taste conveys further fig and quince like character. This bottling has excellent potential for ageing and further development.’

Crafted from grapes grown in the Elandskloof Valley behind the village of Villiersdorp, the Crocodile’s Lair/Kaaimansgat Chardonnay is rich in flavour with a distinctive mineral quality, which offers expanded taste expression. ‘Lots of melon, green apple, litchi and slight vanilla tones achieved from the French oak maturation. Creamy components will expand with time enhancing the flavour if further maturation is encouraged.’

Various vintages from the Bouchard Finlayson stable scored equally well in Tim Atkin’s South African Special Report for 2017, with Medals of Excellence awarded to no less than four other vintages. These include scores of 93 for the 2013 Têtê de Cuvée Pinot noir, the 2015 Galpin Peak Pinot noir, and the 2015 Missionvale Chardonnay, and 92 for the unique 2015 Hannibal red blend.

James Suckling, in his South African Report 2017, also rated the current Bouchard Finlayson vintages highly, scoring the 2013 Têtê de Cuvée Pinot noir at 94 points, followed by the 2015 Galpin Peak and 2015 Missionvale both at 93 points, 2015 Hannibal at 92 points, and 91 points for the 2015 Crocodiles Lair Kaaimansgat Chardonnay and 2015 Sans Barrique.

Wrapping up the international awards season, Greg Sherwood MW, scored the 2014 vintage of the Crocodile’s Lair Kaaimansgat Limited Edition Chardonnay at 94 points, in his 2017 report of ‘A fine wine safari’.