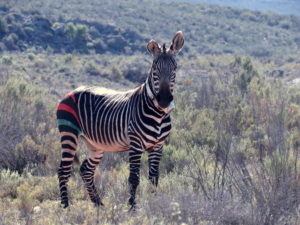 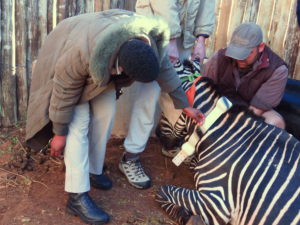 CapeNature’s Gamkaberg Nature Reserve in the Little Karoo saw a Cape mountain zebra capture and translocation operation on Friday, 2 August 2019. This joint conservation in action initiative by Sanbona Wildlife Reserve and CapeNature forms part of the Cape mountain zebra Biodiversity Management Plan (BMP), which aims to improve the resilience and growth of this iconic Western Cape subspecies by spreading the metapopulation to appropriate habitat within the province.

The Cape mountain zebra conservation story is a ray of light in a time when we are facing overwhelming biodiversity loss, described by some conservation experts as “the sixth mass extinction”. The population of these zebras, once reduced to around 60 individuals, now stands at about 5000. The zebras, previously classified as Critically Endangered, are no longer considered threatened thanks to public and private conservation efforts. But active management is needed to keep numbers stable.

One of the main threats to the long term survival of Cape mountain zebras is inbreeding. There are three genetic lineages of these endemic zebras Gamkaberg, Kammanassie and Cradock – and all of these have low genetic diversity. The Cradock lineage is the most numerous and widespread, but the Gamkaberg and Kammanassie lineages occur only on the nature reserves bearing those names.

Gamkaberg Nature Reserve, near Calitzdorp in the Little Karoo, effectively holds one-third of the gene pool of this important subspecies. In 1974, the already small population of zebra on Gamkaberg was reduced to only six animals, when seven were poached by a local farmer. This resulted in a genetic bottleneck, and the current Gamkaberg population of 30 or so animals is severely inbred. Previously, experts were of the opinion that, the Gamkaberg lineage should be kept pure. However, scientists now believe that in order to ensure the long term survival of the zebras, mixing of genetic lineages must be considered for restoration of genetic diversity.

In May this year, a novel opportunity arose to implement this recommendation and take bold steps towards safeguarding these zebras in the long term. Gamkaberg Reserve Manager, Tom Barry, was alerted to the fact that a herd of eland had broken out of the reserve, and six zebras had been quick to follow suit. Five of these animals were all part of the same breeding herd, so they were quickly captured and returned to the reserve to continue to help the small population grow. But the sixth animal was a lone male which, from the reserve’s zebra register, was known to be a bachelor. The decision was taken to capture this animal and, after the obligatory African Horse Sickness quarantine period, move him and his precious genes to a new location.

The chosen location for the stallion was Sanbona Wildlife Reserve. Sanbona, at the foot of the Warmwaterberg Mountains, is the ideal mixing bowl for Cape mountain zebra genes. At 58,000 ha, it is already home to more than 50 of these zebra. Twenty-eight of these were brought to Sanbona from CapeNature’s De Hoop Nature Reserve in 2016. The Sanbona animals are a mix of two of the three Cape Mountain Zebra lineages: Cradock and Kammanassie.

Paul H. Vorster, General Manager: Sanbona Wildlife Reserve adds: “Conservation and sustainability are the cornerstones of our operations and it is a privilege for Sanbona to provide sanctuary to several endangered species. We are pleased with the ongoing success of our Cape mountain zebra project, and as custodians of this rare subspecies we look forward to working with CapeNature to incorporate the new stallion into the reserve.”

TINTSWALO TO EXPAND WITH THE LAUNCH OF TWO NEW PROPERTIES