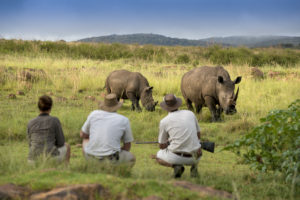 Mhondoro Safari Lodge has introduced rhino tracking as a new guided activity within the Welgevonden Game Reserve in the Waterberg (Limpopo province, South Africa). Spread across 35 000 hectares, Welgevonden is home to a large population of White rhino (Ceratotherium simum), protected by an effective anti-poaching unit within the borders of the reserve.

Accompanied by experienced game rangers, guests have the opportunity to embark on a once-in-a-lifetime experience in search of these highly endangered animals, which are widely prosecuted and poached for their horns.

Due to the varied terrain, rhinos can be tracked on foot and observed in their natural habitat. The male White rhino weighs in at more than 2000kg. As grazers they are perfectly at home in the beautiful valleys and plateaus of the reserve. Welgevonden’s rhino population is in very good health, with a few youngsters born each year. Thanks to large numbers of rhino in the reserve, guests have an excellent chance of tracking a ‘crash’ of rhino, the collective noun for these large pachyderms, and may even be lucky enough to catch a glimpse of a juvenile or a new-born still learning the ropes from its mother.

During this unique excursion, rangers will share up to date information about the current and historical status of these ancient animals, including educational aspects relevant the species’ protection status, its physiology and behaviour.