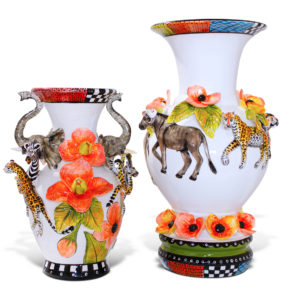 Known for championing various community and outreach programmes throughout South Africa, Tintswalo is proud to help facilitate entrepreneurship and promote up-and-coming local talent. The family owned company has been instrumental in the success of a collective called The Riversands Incubation Hub in Johannesburg – a large-scale business incubator that was established in 2015 through a partnership between the Tintswalo family’s Century Property Developments and the Jobs Fund.

The Hub works with black-owned start-ups, as well as already established businesses, offering entrepreneurs exhibition space, and business and skills training programmes – with the aim to foster the development of high-potential enterprises.

One of the success stories to emerge from The Hub is that of ceramic artist Joe Govo. Born in Zimbabwe, Govo (41) remembers falling in love with art at the tender age of five, while watching his uncles paint artworks. Entirely self-taught, he followed in the footsteps of his family, initially by selling his own paintings to women in his local neighbourhood. His calling for ceramics came later, at the age of 20, when he started to work for a local ceramics company called Penzo Zimbabwe. In 2004 he moved to South Africa to join the art collective Intu-Art (now Artists of Africa) in Johannesburg.

In 2006 he established Joe Govo Ceramics, a proudly South African business concept that embraces passion, creativity and human development. Over the years Govo has collaborated with several other ceramic artists. These fruitful collaborations have elevated his public exposure, and helped develop diversity within his own ranges. In 2013 the talented artist crafted his successful ‘Citizenship’ collection of ceramics, conceptualised by Creative Director Rial Visagie from the Ceramic Factory.

Govo joined The Riversands Incubation Hub when it first opened in 2015. It was at The Hub that Govo caught the eye of Tintswalo Lodges CEO Lisa Goosen, who is involved in the collective as a facilitator. She immediately fell in love with his work and took a personal interest in his work as a mentor to his business. Govo’s exclusive, handmade designs can now be found at each of Tintswalo’s three properties: Tintswalo Safari Lodge, Tintswalo at Waterfall and Tintswalo Atlantic, where guests can not only admire, but also purchase the precious artworks from their gift shops. They are also popular with both local and international art collectors and individuals who wish to own bespoke pieces. Lisa Goosen says Tintswalo is delighted to be mentoring the artist: ‘It is vitally important for South Africans to support the arts, as well as entrepreneurship, and Joe Govo’s outstanding talent certainly deserves to be in the spotlight.’

Govo’s collections, including his current Rhino Collection, Tableware Collection and Loft Living range, draw inspiration from nature, wildlife, as well as humans and current issues. His Rhino Collection for instance aims to raise awareness for the plight of the rhino, while also celebrating the majestic endangered animal through his designs. This is in line with Tintswalo’s own efforts in this field – Tintswalo Safari Lodge aims to provide funding and support the Southern African Wildlife College (SAWC), for a variety of urgently needed anti-poaching interventions in the Manyeleti Game Reserve, Greater Kruger National Park.

With the support of the Tintswalo family and The Hub, Govo has been able to refine his craft and gain further exposure in the process. He is keen to pass on his experience and knowledge to the next generation of up-and-coming artists: ‘I have been fortunate to do what I love most, and now, the biggest highlight for me is taking youngsters under my wing, and teaching them to make ceramics. I believe there is no greater joy than to give someone a skill that will help them make a better life for themselves and provide for their families.’