Tintswalo Atlantic will be opening a new restaurant on Wednesday 29 July 2020. The Tintswalo Kitchen will welcome both resident guests, as well as casual diners with bookings taken for lunch and dinners from Tuesday to Saturday, as well as Sunday family lunch. (Closed Monday and Sunday dinner. Last sitting for non-residents’ dinner is 6pm, due to current Covid-19 curfew)

Reservations are essential, via Dineplan.

With an experienced, newly appointed kitchen team at the helm, the dining concept will feature fresh, seasonal cuisine, presented as Small Plates. The fixed-price menu of R650 per person offers diners their choice of 5 items selected from the menu that will list a variety of Small Plates, including seafood, vegetarian and vegan options, as well as desserts.

The Tintswalo Kitchen experience can be enjoyed in a relaxed seaside environment with a choice of cosy fireside dining, or outdoor seating on the deck above the crashing waves. The menu will be complemented by an award-winning wine list – pending Covid-19 alcohol restrictions. Health and safety protocols will be of the highest standard and during the current Covid-19 restrictions, no more than 40 diners will be accommodated.

The Tintswalo Atlantic boutique hotel is uniquely situated on a pebbled beach below Chapmans Peak Drive in Cape Town. It is renowned as one of the city’s most precious hidden gems and is lauded for its romantic setting and spectacular sunsets. The current hotel dining area will be more than doubled in size for the new restaurant, incorporating the generous space that is currently the hotel lounge and bar area.

Two of the guest rooms are being converted into a private bar and lounge area for in-house guests only. Situated on the opposite side of the property, this exclusive relaxation area for resident guests will make the most of the breathtaking sea views, overlooking the hotel swimming pool, deck and private beach. When the hotel re-opens on 29 July 2020, it will have 10 guest suites, including a 2-bedroom Presidential Suite, all individually decorated and named after famous islands around the world.

Coinciding with the launch of the new restaurant concept, a special 50% discount offer on accommodation is available to South Africans residents when booking a luxurious 2-night Staycation. 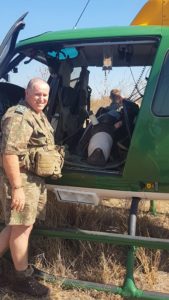 An orphaned rhino calf is recovering in an enclosure at the Care For Wild Rhino Sanctuary in Mpumalanga after an epic rescue mission took place in the southern parts of the Kruger National Park on Sunday 5 July 2020.

The male calf, who is estimated to be between six and eight months old, was spotted by pure chance by a member of JEMU, the Environmental Monitoring Unit of Jock Safari Lodge, who was on his way to the Concession.  Owned and managed by the non-profit Caleo Foundation, Jock Safari Lodge was the first private concession within the Kruger National Park. Over the past 20 years Jock has worked closely with SANParks in support of various conservation initiatives, including the protection of endangered species such rhinos.

When it was found, the calf was clearly in distress, wandering around on his own just off a main tourist road. Rhino mothers very rarely leave their calves, which indicated that the mother was most likely already dead. The Kruger National Park Regional Ranger was immediately alerted to the baby rhino, who instantly assembled a Reaction Team in a combined effort to save the orphaned calf.

The rhino calf was however moving deeper into the bush and fearing that the Reaction Team might not find the calf if visual was lost, the JEMU member started tracking the baby rhino on foot. After about 2km, the calf suddenly came into contact with a herd of about 15 elephants. The elephants were aggressive and repeatedly charged towards the baby rhino with the obvious intent to kill it. Supported by a Kruger Park official that caught up with him, they distracted the herd by shouting and clapping hands to draw attention away from the rhino calf. WATCH  SHORT VIDEO CLIP HERE: https://youtu.be/qVSA3xYQBJc

Clearly dazed and confused, the baby rhino continued to follow the elephants, with the aggressive matriarch charging continuing, placing the calf in grave danger. After several charges, the calf fortunately ran off into another direction, where he was later found standing next to the carcass of his mother. The mother had been killed by poachers and her horns had been removed. She was left to die, unable to provide for her baby or defend the vulnerable calf.

There was a flurry of activity, not only with the elephants in hot pursuit of the calf, but by now there were several lions very close to the carcass, making several advances on the calf. The lions spotted the JEMU member and left the calf to stare down the JEMU member with growls and tail whipping. The team retreated to a large termite mound, where they communicated a new GPS Coordinate to the Reaction Team and kept lock on the baby rhino until the helicopter had visual on the site.

Instinctively, the exhausted baby rhino gave one last chase with the arrival of the chopper, closely followed by an enraged elephant cow. Thanks to his excellent flying skills, the helicopter pilot managed to separate the calf from the herd of elephants to give the Vet the opportunity to dart the baby. After a few minutes, the calf was tranquilised, giving space for the Reaction Team to move in and perform vital lifesaving first-aid on the baby. A drip was inserted to treat its obvious dehydration and the calf was safely transferred by helicopter to the Care For Wild Rhino Sanctuary, where its founder Petronel Nieuwoudt and her team were on standby to meet the precious new arrival. WATCH A SHORT VIDEO CLIP HERE: https://youtu.be/2IgqCpkQngQ

The baby rhino was taken into the ICU for monitoring and to receive vital fluids through the line that was administered in the field earlier that day. The calf was assessed for wounds, but apart from lion scratch marks, he seemed to have escaped relatively unscathed. The calf was clearly very traumatised after its ordeal and the sanctuary team spent the first night in the enclosure with him to monitor his progress.

In a recent update, it was reported that the calf has accepted the bottle of specialised, formulated milk and is drinking about 16 litres per day. He remains in a small enclosure and is still on a drip to monitor his vitals and organs. To recover from severe trauma like this, the first 24 to 72 hours are the most critical and it is therefore estimated that he should have a good chance of survival. WATCH A SHORT VIDEO CLIP HERE: https://youtu.be/iFqV7E7D3mk

Having survived all of this, he’s been dubbed Nhlanhla, ‘the lucky one’ in local Shangaan language. 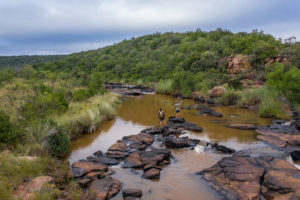 Tintswalo Lapalala will be introducing fly-fishing on a ‘catch, release and research’ basis as a new activity within the pristine Waterberg reserve. Located three hours’ drive from Johannesburg, the sprawling 48 500 ha Lapalala Wilderness Reserve is a malaria-free sanctuary for many plant and animal species. These include the Big 5, but it is the spectacular Palala river that runs 37 kilometers through the reserve that sets it apart. With riverside locations that are easily accessible on foot, rocky rapids as well as deep, calm pools of clear and unpolluted water present exhilarating fishing opportunities suitable for all competency levels.

The Palala river is teeming with fish that includes healthy populations of a wide variety of species such as yellow fish, barbel, largemouth bass, red breasted and blue tilapia to offer excellent nymph style fly-fishing. In the dam, carp, yellow fish, silver catfish, barbel and tilapia offer sinking-line fishing for novices, including children.

The Lapalala Wilderness Reserve is one of the largest private reserves in South Africa and was founded in 1981 by conservation champions, Dale Parker and Clive Walker. It is recognised as a champion of sustainable wildlife conservation with the vision to leave a legacy for generations to come. Fishing is scientifically monitored and operated strictly on a catch-and-release basis. Led by qualified nature guides who are passionate and competent anglers, data is collected for ongoing scientific research projects.

During the drier months, April through to October provide the best fishing opportunities when the river is calmer and more accessible. During the summer months fishing excursions take place in the south of the reserve where the deep pools may yield feisty yellow fish of more than a kilogram.

Specialist fly-fishing packages are customized for keen anglers, while regular guests may opt for early morning or late afternoon fishing excursions. Guests may also  choose to spend the day out in the reserve fishing at leisure and enjoying the tranquility of a river picnic at lunch.