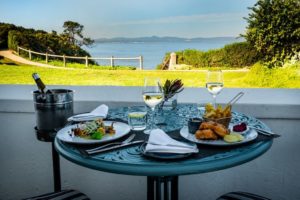 The Marine Hotel in Hermanus has appointed Rudolph Blaauw as Executive Chef to oversee all culinary operations, including the famed restaurants Origins and The Pavilion. The Marine, a member of The Liz McGrath Collection, is one of South Africa’s most spectacular seaside hotels and is a proud member of Small Luxury Hotels of the World.

Chef Rudi brings with him extensive experience gained at two Relais & Châteaux properties, including five years as Executive Sous Chef at Delaire Graff Estate’s famed Indochine Restaurant in the Cape Winelands. During his most recent tenure as Executive Chef at Ellerman House in Cape Town, he worked alongside his mentor, Relais & Châteuax Grand Chef Peter Templehoff. Prior to Ellerman House, Templehoff raised the culinary bar at The Liz McGrath Collection during eleven years as Executive Chef at the award-winning Greenhouse at The Cellars Hohenort, sister property to The Marine and The Plettenberg.

From an early age Rudi Blaauw learned the tricks of the trade from his father, who also was a professional chef. The young apprentice cook completed his training at what was then known as The Mountain Manor Hotel in Franschhoek, now Le Franschhoek. During the past 20 years as a chef, he also gained valuable international experience working as a private chef in Qatar and the UK. When asked about his food philosophy, it’s an easy answer for this Chef who concentrates on the quality of the produce, letting that shine and believing that creativity will follow.

At The Marine’s Origins Restaurant, Chef Rudi has introduced a new a la carte menu, which includes what Chef Rudi describes as ‘everyday’ favourites that showcase local flavours. ‘My new menu is inspired by our suppliers and the local produce. I like to have stories attached to dishes and create a menu that’s exciting for diners, but also for our chef team too, encouraging them to experiment with flavours and learn new techniques.’

Paying homage to its seaside location, The Marine likes to support ethical fishing and buy from local fishermen who catch fish by the line. Starters focus on fresh seafood, followed by a section dedicated to a variety of interesting and healthy salads. Main courses are divided into specialties from ‘The Sea’ and ‘The Land,’ with dishes highlighting the produce of the Overberg.

Rounding off the menu is a selection of mouth-watering desserts, including the Chef’s personal favourite – Wesley’s Fynbos Canelés de Bordeaux with Madagascar vanilla ice cream and gummi bears of the region.

‘The idea behind our canelé dessert is for our guests to prepare the palate and enjoy a small honey tasting before they indulge in the dessert. The honey that we use is supplied by Wesley Abrahams, our very own Sous Chef in the kitchen, a beekeeper in his spare time, who oversees the honey production from start to the final product. The ‘honey gummi bears’ are created by using three different types of honey, from different regions. It starts with the multi-floral honey from Betty’s Bay, then Blue Gum honey from Stanford, and our favourite – fynbos honey from the Hemel-en- Aarde Valley. It brings a distinctive and delicious, playful element to this small French pastry as a showstopper dish with an intriguing element of local storytelling to it.’

The Marine has ongoing special offers and themed evenings that are popular with locals and visitors alike, including fresh Fish & Chips Fridays, Roasting Sundays, and Food & Wine pairing events to showcase the wines of the region. Believing firmly that the time to support local is now, Chef Blaauw invites patrons to enjoy his expertly prepared menu of ‘simple pleasures’. This celebration of the produce and talented artisans of the area comes together perfectly in a menu centred around the origins of fine food.

TOUCH DOWN TRAVEL TECH TO SHAKE UP THE MARKET