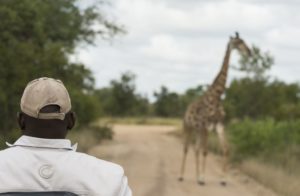 Tintswalo Safari Lodge has received wide acclaim for its exciting virtual safaris which have been viewed online over the past year by millions of fans locally, and all over the world. When level 5 hard lockdown first kicked in and its lodges were deserted, Tintswalo acted swiftly and instinctively to find a creative way to continue communication with loyal guests.

In the African bush nature played out as it had since the beginning of time, and the guides of Tintswalo Safari Lodge continued their early morning game drives to monitor animal activity and conservation within the reserve. Getting up at the crack of dawn, they started filming what became known as the ‘On the Beat in the Manyeleti’ virtual game drives, which were broadcast on social media around the globe.

The first virtual safari went live on 25 March 2020 with 41 092 views. Now, exactly a year and 178 episodes later, Tintswalo’s Virtual Safaris have received an astonishing 7,4 million views from followers all over the world.

Says Alistair Leuner, Regional General Manager of Tintswalo’s Safari Operations: ‘During lockdown social media became a lifeline for many people as a way to connect to the world out there. People were looking to escape boredom and isolation and were searching for interesting and meaningful content. It was a great opportunity for Tintswalo to not only bring the bush right into their living rooms, wherever they were, but also to inform and educate the public about various important conservation issues.’Hosted and narrated by experienced guides, each and every virtual safari brought new adventures to the screen. From tracking the day-to-day movements of a herd of elephants and exhilarating sightings of wild dogs passing through the area, to following the Manyeleti’s magnificent Mbiri pride and finding a lion cub in a tree. Heart-warming comments and support poured in daily from fans far afield. This was ‘reality TV’ at its most authentic best!The game rich Manyeleti Nature Reserve is known world-wide for its Big 5 sightings, but also for its birdlife and many smaller and other interesting creatures. Tintswalo’s ‘On the Beat’ virtual safaris include video footage of actual sightings and personal encounters experienced by game rangers on patrol. Whilst nothing beats going on safari in real life, Tintswalo’s virtual safaris are still continuing and are said to be an inspiration to many viewers who are planning their ‘bucket list’ safari trip of a lifetime.

Videos are uploaded daily on all Tintswalo’s social media channels: