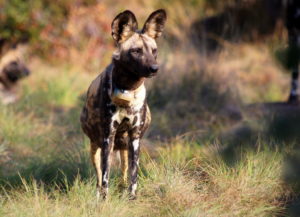 According to Glenn Phillips, Chief Executive of Lapalala Wilderness, the dogs, which are currently in a boma on the reserve, have adjusted well: ‘So much so, that we are delighted to announce that the alpha female has produced a litter of pups. The birth of this litter of pups  provides a welcome boost to the survival of this endangered species and we look forward to setting them free in the reserve together as a pack when the pups are strong enough, probably around the end of August (2020)’.

Further exciting news is the live streaming from the reserve, where technology driven wildlife and conservation media company Painted Dog TV has installed bush cameras allowing viewers 24/7 insight into the daily life and behaviour of the pack. Three individual bush cameras have been positioned to focus on the den site, the feeding site and the waterhole.

Due to ongoing habitat fragmentation and conflict with human and agricultural activities, the African Wild Dog (Lycaon pictus) is one of the world’s most endangered mammals. According to the latest estimates, there are only around 6500 individuals left in sub-Saharan Africa. In 2018, this particular pack had only numbered two individuals. Since then, the pack has successfully raised two litters in the Vrymanrust area of the Waterberg. Unfortunately, the pack started predating on livestock as there was potentially not sufficient numbers of natural prey in the relatively small area they were utilizing. A decision was therefore taken by the Wild Dog Advisory Group (WAG) to capture and relocate the pack to a safe area within the Waterberg.

Phillips continues: ‘Growing human populations and the shrinking of habitat suitable for endangered species such as wild dog, makes this conservation project vital for the survival of the species. Lapalala Wilderness is therefore honoured to be part of such an important conservation project.’

The Reserve ecologists have been carefully monitoring the animals in Lapalala’s predator bomas during the post-release period. ‘By keeping the wild dogs in a large holding boma for a few months, we are attempting to break their inherent instinct to return to the area they originated from, as well as teaching the animals to respect electric fences’, says Herman Muller, Biodiversity Manager at Lapalala Wilderness.

Founded in 1981 by conservation champions, Dale Parker and Clive Walker, the Lapalala Wilderness Reserve is one of the largest private reserves in SA. It is recognized as a champion of sustainable wildlife conservation with the vision to leave a legacy for generations to come.

The Reserve stretches across 48 500 hectares of pristine bushveld and will provide ample hunting opportunities for the wild dogs. Wild dogs are highly effective predators and form an essential part of natural ecosystems by keeping herbivore numbers in check. Home to the Big 5, Lapalala is a unique landscape and offers opportunities to see numerous endangered species such as Roan antelope and Black rhinoceros. Boasting breath-taking scenery amongst classic savannah biomes, it offers 27 kilometers of perennial river frontage in the form of the Palala river, 800km of game viewing vehicle tracks, and excellent game viewing. The wildlife in this region is staggering in numbers, including 290 bird species, 60 mammal species, 97 reptile, 19 fish and 17 amphibian species, as well as 169 different types of trees and 25 species of aloe.

Says Lisa Goosen, CEO of Tintswalo Lodges: ‘Our luxury tented camp Tinstwalo Lapalala is operated off the grid and is one of only two lodges within the reserve. It is family friendly and accommodates only 16 adults and four children. The guest experience is unique as one really feels as if you have the reserve all to yourself when out on game drives or wilderness walks. We are very excited about the arrival of the wild dogs in the reserve and soon, we hope our guests will have the opportunity to view the wild dog in their natural habitat within the reserve’.

Within the Lapalala Wilderness Reserve, excursions are also offered to an iron age site to view ancient artefacts and Bushmen rock art paintings. Visits may also be arranged to the famous community based Lapalala Wilderness School, which to date has hosted more than 100 000 children and young adults in its Environmental Education programme.

A FEATHER IN THE CAP FOR BROOKDALE ESTATE CHENIN BLANC 2019