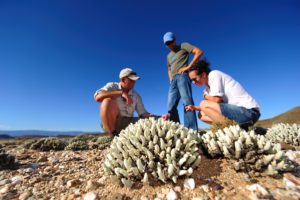 Cape Town, July 2021: Conservation history has been made in the Western Cape with the registration of Sanbona Wildlife Reserve as a non-profit company, following its rezoning from agricultural to conservational use.

Sanbona is one of South Africa’s largest privately-owned nature reserves, stretching across 58 000 hectares of rich protected ecosystems within two biodiversity hotspots. This vast track of land in the Little Karoo outside Montagu will from now on be governed by a Protected Area Management Agreement.  This formal proclamation of Sanbona as a Nature Reserve in partnership with CapeNature’s Biodiversity Stewardship Programme is set to secure its future for perpetuity.

General Manager Paul Vorster says the transition into a non-profit company is a milestone for conservation. Particularly for the protection of threatened ecosystems, the reintroduction of extirpated wildlife, and restoration of degraded habitats that preserve numerous rare species. ‘Having this large private conservation area converted into a non-profit model allows for a vehicle of collaboration with conservation bodies and community development, as an internationally accepted model for sustainability.’

Twenty years ago, an audacious dream was given life on the arid plains of the Little Karoo. More than 500 square kilometres of agricultural land was earmarked for the creation of the reserve that would attempt to conserve the heritage, ecosystems and landscapes, while creating employment opportunities in one of South Africa’s hardest hit rural centres. Risks were quantified and with a leap of faith, species that had become locally extinct hundreds of years previously, were reintroduced to explore their new home, including elephant, hippopotamus, cheetah and lion.

Although many other reserves in South Africa have successfully been transformed in previous decades from other uses, this was the first attempt in an arid Karoo environment. Numerous challenges were faced without case studies or scientific literature to inform the process. Sanbona’s dedicated conservation team has spent the last 20 years developing and refining a model that identifies outcome driven projects, with the goal of establishing resilient ecosystems, landscapes and communities. These innovative projects have fostered collaborations with international academic institutions and leading conservation organisations.

In October 2015, Sanbona Wildlife Reserve was bought by the non-profit CALEO Foundation and the reserve entered a new phase of its vision. The Foundation’s goal is to protect critically vital ecosystems, endangered wildlife and flora, so that they can prosper. The acquisition of Sanbona was perfectly suited to meet this goal and over the years it has become a role player in many ground-breaking conservation initiatives.

On behalf of future generations, CALEO Foundation decided that the best way to ensure the protection of Sanbona would be to donate and transfer it into a non-profit company (NPC), as this transfer significantly enhances the prospects of the reserve being preserved as a wilderness refuge indefinitely. The new non-profit entity of the reserve is the Sanbona Nature and Wilderness Reserve NPC. Following onto this objective, the NPC can now drive donorship into conservation funding with the added benefit of qualifying as a public benefit organisation (PBO). This comes with associated advantages, among which is the tax benefit it affords to donors, whereby donations made to Sanbona NPC may be treated as tax-deductible expenses.

Today, Sanbona serves as a major role player in the conservation realm, which is shared and intricately woven into the guest experiences at each of the three luxurious lodges, Tilney Manor, Gondwana Family Lodge and Dwyka Tented Lodge, as well as the seasonal Explorer Camp. Revenue from the hospitality business will continue to be invested in Sanbona NPC. In effect, all funds generated by tourism at Sanbona will now be injected directly into the ongoing, long term protection and identified conservation projects, as well as protected area expansion.