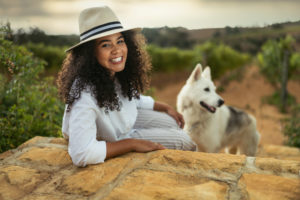 Kiara Scott, the talented young winemaker of Brookdale Estate in the Paarl Winelands, has received recognition from WineLand magazine as one of 2021’s most promising young wine ambassadors in the South African wine industry.

WineLand Media, in collaboration with ROTOCON, honoured 30 young professionals who are making their mark in the South African wine industry. The June 2021 issue of WineLand magazine, with the theme 30 Under 30, pays tribute to these 30 individuals from across the country. ‘Our goal is to pave the way to prosperity,’ says editor of WineLand Media, Wanda Augustyn. ‘To make this dream a reality, we have to identify and give recognition to the young voices in the industry who are making a difference, by shining the spotlight on them. They will become the leaders of tomorrow and we want to tell their stories, share their visions for the industry and help shape their future.’

Kiara Scott (29) has been the winemaker of Brookdale since 2019, following two years as assistant winemaker of the estate, where she worked alongside consultant winemaker Duncan Savage to establish Brookdale’s reputation as a producer of wines of character and elegance. She was born in the Cape Flats and graduated from Elsenburg Agricultural Training Institute in Viticulture and Oenology in Stellenbosch. She was then selected for the 3-year CWG Protégé Programme, where she gained valuable experience under David Nieuwoudt (Cederberg Cellars), Carl van de Merwe (De Morgenzon) and Charles Hopkins (De Grendel), and had the opportunity to work vintages in the Rhône Valley, Sancerre and the Russian River in Sonoma (California). She says: ‘I have a simple and minimal intervention approach to winemaking. I believe that great wines are made in the vineyard. Year on year I am aiming to better understand our vineyards and soils to make the work in the cellar easier.’

Set against the dramatic backdrop of the Klein Drakenstein mountains in Paarl, Brookdale Estate produces wines as unexpected as they are enchanting. A true Cinderella story, Brookdale was once overgrown and underused. The Rudd family, originally from the United Kingdom, recognised the potential of the property and acquired the 67-hectare estate ​in 2015. Their vision was to create a world-class country estate producing fine wines, including interesting blends crafted from varietals that are somewhat ‘unusual’ in South Africa. A single block of old-vine Chenin Blanc, estimated to be about 36 years old, was saved to become Brookdale’s maiden release in 2017. Currently, Brookdale produces this flagship Chenin Blanc, as well as a range of Mason Road wines, which includes a Chenin Blanc, Syrah and Rosé produced from newly planted vineyards. The Rudd family also set out to further restore the balance of nature on the estate by clearing 27-hectares of alien vegetation. Indigenous vegetation was planted, including 3700 trees, as well as expansive gardens for Manor House resident guests to explore. The Brookdale Manor House provides luxury accommodation for up to 12 guests.

The summer of 2021/2022 will see the opening of a new Cellar, Wine Tasting Experience and Restaurant on site at Brookdale.